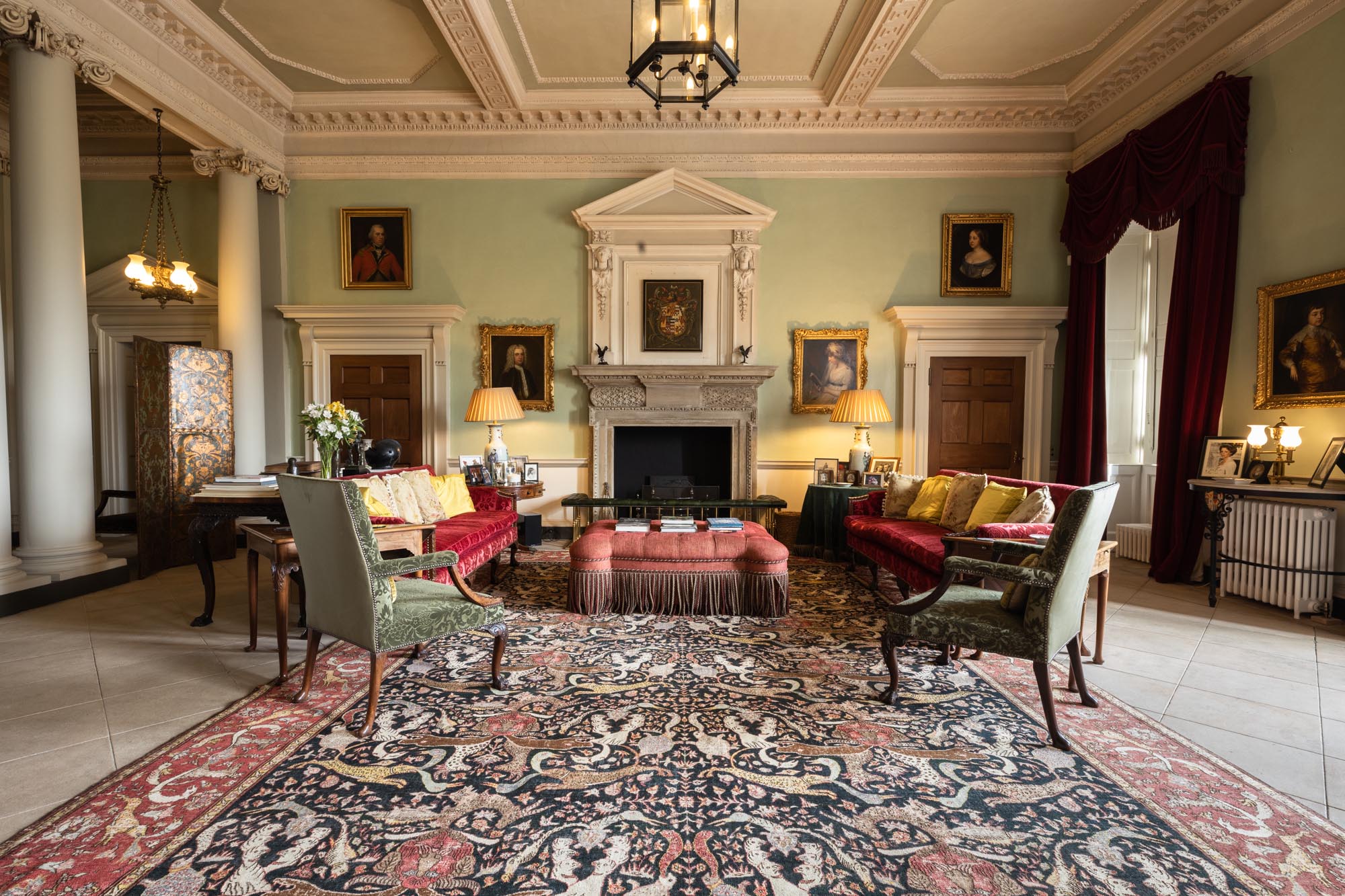 Radbourne Hall, listed Grade I, was designed by Francis Smith of Warwick for German Pole. The main fabric of the House had been restored in the late 1950s and decorated by John Fowler. The object was to repair and re-service the house whilst retaining and conserving the historic fabric including, as far as possible, John Fowler’s decorative scheme. The overarching philosophy was to carry out the work in sympathy with the existing character of the house, retaining and re-using as much material and as many features as possible.

Under a full scaffold and temporary roof, the original roof structure was exposed and found to be in remarkably good condition requiring only minor repairs to a handful of rafters. Consequently, work was focused on insulating the attic, rebuilding sections of unstable parapet, renewing the thin and often replaced slipping slates with Welsh slates and adapting the failing lead gutter bays to comply with contemporary standards. The stripped lead work was re-cast, breathable wood fibre insulation used to improve thermal performance to the ceiling and inhabited attic areas, roof fire break partitions introduced and the new slates were torched with a lime/hemp mix to address wind up-lift. Cutouts of the handprints and initials of the 18th-century roofers were left on the top of the south pediment.

The second major issue was the failure of the 1950’s roof level steel lattice beam to address the deflecting timber beam supporting the first floor. The solution adopted was to re-use the existing hangers and insert a new set of steel beams within the roof void, spanning the structural walls and relieving the stress on the chimneys and already overloaded timber joists. Unfortunately, the chimneys had sustained too much damage and were partially rebuilt, largely using original bricks.

Thirdly, the electrical and mechanical services were completely renewed using Mineral Insulated Copper Cabling (MICC) wiring for the former and a new two-copper pipe heating system fed with a new Biomass boiler for the latter. Wiring and pipework largely followed existing routes to minimise the impact on existing fabric. The flooded ground floor service trench which had caused significant damp to the ground floor walls and ceiling plaster was emptied, dried out and extended with new accessible covers installed to allow easy future access.

The piano nobile interventions were limited to the installation of a new kitchen and reinstatement of the enfilade from the kitchen through the Entrance Hall into the Library, mirroring that on the other side of the house from the Dining Room through to the Saloon and Drawing Room. A new set of structurally independent Stanton Moor rusticated ashlar steps, to match the existing elevation, with Woodkirk stone treads was added. With a small gap to the existing house, it provides a direct connection from the Saloon which overlooks the lake to the village beyond, down to the ground floor terraced garden, similar to those at other Francis Smith houses including the very similar Kelmarsh. Discreet LED lighting strips were also incorporated within the handrail.

Other work included revealing and exposing two additional windows lined with 3 layers of wallpaper designs discovered behind what were believed to be dummy windows in the Butlers pantry, re-plastering half the Library ceiling in chestnut lath and lime plaster, the addition of three new bathrooms on the second floor and extensive asbestos removal. Modern gypsum plaster used on the ground floor in the late 50’s was replaced with three coat lime plaster.

Although the entire house was redecorated, the existing John Fowler scheme was retained with the exception of the kitchen, butler’s pantry and one or two bedrooms. The colours were faithfully reproduced under the guidance of Fiona Lansdowne who had worked with Imogen Taylor, herself a designer of the original decoration with John Fowler. Most curtains were saved and restored where needed and all the rugs mended and cleaned. All wood panelling exposed floors and staircases were cleaned with minimum intervention and revived with an oil and beeswax composition and some shellac on the main staircase.

Externally, stone and brickwork repairs and re-pointing were carried out around the house using a bespoke lime mortar mix by Ty Mawr for the repairs to the south pediment tympanum and the front steps and to rebuild the collapsing old retaining wall in the yard. The retaining wall was dismantled, numbered, the inner brick wall re-stabilised and then re-built with a Lime Crete slab over the top to keep the weather out. A number of listed Blashfield terracotta urns and tazzas were also restored by Stephen Pettifer at Coade Stone, with replaced handles and remodelled face. Finally, rhododendrons that previously obscured the principal facade were removed, allowing once more a clear view from and towards the house.

Conservation of the historic stonework at Radbourne Hall

See all our news